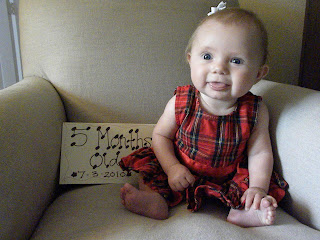 3 posts in one day!!! I've had so much to share on this blog but had no time to do it until today thanks to all of our boxes (except about 5 with some random things I can do without for a few more days in them) being unpacked!

My little baby girl is five months old today. I don't know why five months feels so much older to me than the rest of her milestones, but for some reason it just does! She has changed so much in the last month and is able to do so many new things!


She weighs a little over 14 1/2 pounds and is 25 inches long. She is eating rice cereal mixed with some sort of fruit (bananas, apples, or pears) once a day in addition to the 5-7 ounces of breastmilk every 2 1/2-3 hours. She loves to hold the bottle or spoon when feeding her, which makes for a VERY messy solid food feeding because instead of grabbing the handle everytime, she usually is able to get a hold of the spoon and gets food all over her hands, and then whatever else she touches-which makes her dog Chevy very happy!


She is sleeping through the night on most nights (anywhere between 6 1/2- 9 1/2 hours at a time). However, she still wakes up on occasion after 4 or 5 hours, which we're still working on letting her cry it out at these times so she can put herself back to sleep (even though this doesn't always help...).


Her personality is starting to shine through, and she loves to laugh and smile. She belly laughs when people sneeze which is really funny! She also loves to be called a "big girl" and gives us the biggest grin when we do. She loves the water: the pool, the ocean, and her baths. 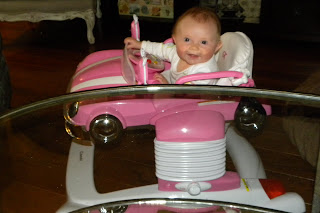 She loves her pink car walker, and walks all over the place while playing the music and honking the horn. I'm so glad our new house is mostly tile and hardwoods so she can roam free! She also loves to roll. We have to strap her down so tight in her swing and bouncy seat because she wants to roll right out of them. Also, no more sitting her in her boppy pillow on the couch! She rolls all around on the couch. We even tried surrounding her with tons of pillows, but she breaks free! She is definitely mobile, and we have to always watch her so carefully!! 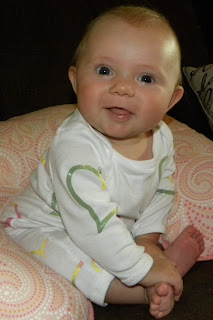 She is starting to be able to sit up by herself for longer periods of time. She loves to feel things and is always trying to feel the floors or the couch or whatever she is sitting on as well as clothes, blankets, mirrors, and pictures. She also loves her feet! She entertains herself for at least 30 minutes at a time while she plays with them and puts them in her mouth (so gross and so cute at the same time!). 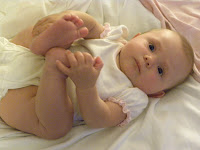 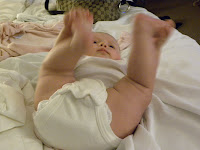 She still loves to grab at objects, but she is able to make contact with them everytime now. She loves to pull on her animals in her playyard as well as the bugs that hang from her infant seat. She is also able to pull the tabs on her animals in her bouncy seat to make them play, and loves to hear the music over...and over...and over!
We are still having the time of our lives with our little angel and I thank God for such an amazing blessing!!! 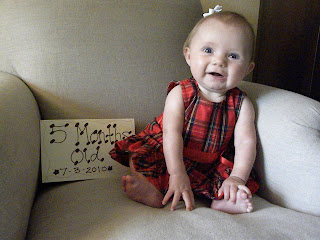 Posted by KariBeth and Josh Gentry at 4:12 PM