I signed Lila up for soccer this Summer since I wasn't sure how much time we were going to have in the Fall once Grant arrives. On the sign up sheet, there was a place that said, "I can't coach, but I'd like to volunteer to help." That option sounded like a good plan, so I went with it.  Fast forward three weeks later, and BAM, I'm listed as the head coach with my information for all the parents to see and contact. While I welcome the leadership role, I have only played one day of soccer in my life (when I was 4), and let's just say it didn't go so well (which is why I only played one day).  I don't even know the rules of soccer, but it turns out that knowing how to play soccer is not a pre-requisite to coaching 3-4 year olds.

Since I'll be 8-9 months pregnant for the season, Josh is taking over as head coach, but he just happened to be out of town today, the first game of the season...JOY. 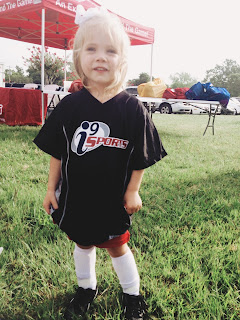 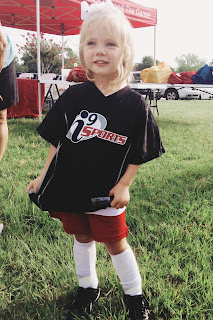 At 9am, we got our coaches packet, balls, and jerseys, found our team and got started with practice.  I have the cutest little team with four boys and two girls (although one little girl wasn't here today, so it was just Lila representing for the ladies). Their parents are super nice, and most of them are just as clueless as me :).  We had an awesome practice, and all of the kids worked together so well and actually followed all of my directions (I didn't have very high expectations, but we did a lot of actual drills today!). 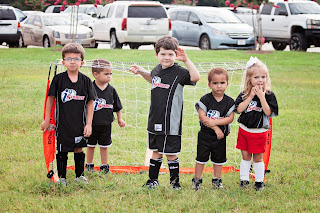 At 9:30am, it was time to start the game.  There was a lot of running around aimlessly, and a little boy on our team (who honestly looked like David Beckham compared to everyone else) really dominated the field.  He scored the only three goals of the game, and pretty much had the ball 95% of the time. I'm just glad he's on our team, that's all I have to say. We'll work on ball sharing next week :) 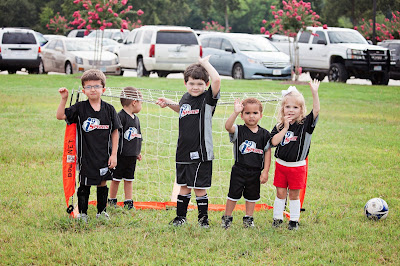 Lila loved the practice portion and can kick the ball like no one else (well, maybe the David Beckham kid), but she wasn't too thrilled when it was time to play the game for real.  It made her a little nervous with everyone running after one little ball that she hung in the backfield (is that even what you call it??) with me, which I thought was just fine...at least she was out there, and not crying (well, there were a few tears shed). 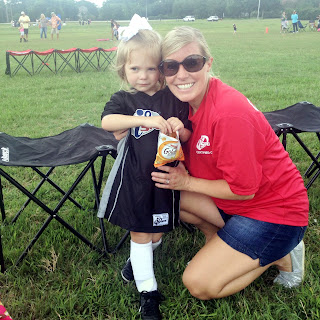 I can honestly say that I had an awesome time coaching these little ones today, and I really wouldn't mind doing it the whole season, but I'm also thankful that Josh will be there to wear the hideous, huge, polyester 'OFFICIAL COACH' jersey next time. 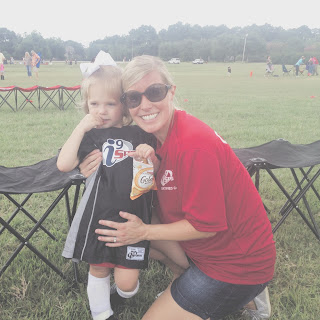 Posted by KariBeth and Josh Gentry at 3:38 PM