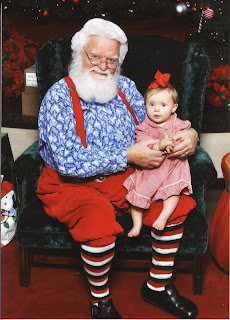 Even though Lila met Santa earlier this month in Georgia, Josh wanted to take her again, so we went to see the Santa here at the Baybrook Mall. I had bought a "fast pass" for Santa which puts you in a special line that, last week, had almost NO people waiting in. Well, either everyone got the memo to purchase a "fast pass" or everyone here in Texas are huge procrastinators because the line was SOOO long! Granted, the line for non-"fast pass" holders was about three times as long! Because just a few days before there was no one that was waiting in the "fast pass" line, I thought this would be an in-and-out type of trip. It would be so fast, in fact, that there was no need to turn around and get the stroller or formula that we had left back at the house because we would be done so quickly. My how we were wrong!! We waited in line (stroller and formula-less mind you) for over an hour and a half!!! I thought that it wasn't worth it, but Josh really wanted to see her with Santa, so we stuck it out. Thank goodness Lila was an angel baby even though she was starving, tired, and tired of being held! She loved playing with Santa's beard when she finally got to see him and gave us some cute pictures. 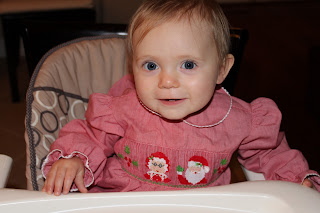 Lila is so happy that she is finally getting to eat again after starving in the Santa line (she did have half of a chocolate chip cookie, but I decided to leave that part out of the story)
Posted by KariBeth and Josh Gentry at 3:56 PM