This morning I had my mid-term ultrasound at the doctor's office. I was a little nervous going into it because I never had any of the genetic testing done, so I just hoped that she was healthy...oh, and still a she!  It went really well, and Alli is growing very healthy and a little ahead of schedule! I knew that they had gotten my due date a couple days off from the beginning, but the ultrasound technician said that she was measuring 18 weeks and 5 days rather than my supposed 18 weeks 0 days. That puts my estimated due date at JULY 14!! I'm not sure yet if my doctor will officially change my due date for just 5 days, but I know that we're that much closer to meeting our precious baby girl!

Alli was moving and grovin the whole time during the ultrasound, and I can feel her move most of the time now! Her kicks are getting stronger everyday! The placenta is in a completely different place than Lila's was, which is why I can feel her so much earlier than I could Lila. I might even be able to see feet and hands move through my belly with Alli later on, which I could never see with Lila because the placenta was in the way. I think she is going to be just as active as Lila is, which is a good and bad thing! I will surely be tired with two crazy babies running around here!

Here are a few pictures from today: 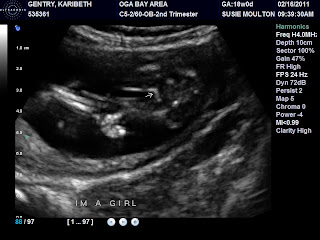 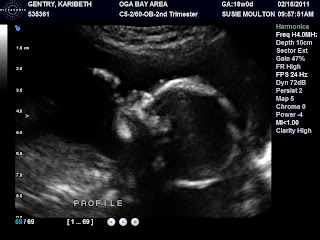 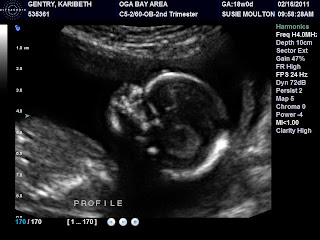 Sweet face
Posted by KariBeth and Josh Gentry at 12:01 PM