Because last year was such a crazy experience (linked here), we decided to take the girls to visit with Santa early this year! It was so special this year, just like last year with Lila, because it was Alli's first time meeting Santa, and she was pretty indifferent towards him. She was just happy to be held and to be out of her car seat, so she was content with him. Lila loves Santa, mainly because of his beard, but this year, she even had a small conversation with him. The Santa at Baybrook is so sweet and acted genuinely happy to talk with her for the few minutes that she sat on his lap.  We even joked that he could keep Alli, and he said that he would be happy to and that he loved babies (I guess you'd have to in order to not go crazy with this job that requires tons of screaming babies to be forced to sit in your lap).  We've had such a productive and festive Thanksgiving holiday weekend and are ready to celebrate Christmas in the coming weeks!

We were looking back on Lila's Santa picture from last year, and I can't believe how much she has changed in one year! I also can't believe that this year there is another precious baby sitting on Santa's other knee that belongs to us! 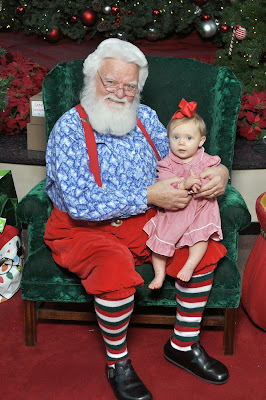 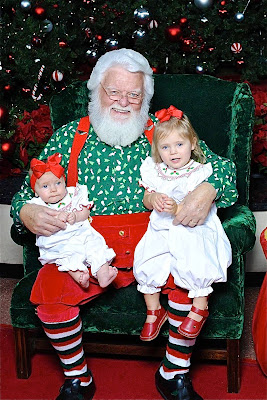 Christmas 2011
Posted by KariBeth and Josh Gentry at 3:49 PM