Lila Milestones and Memories from February 3-May 3, 2012 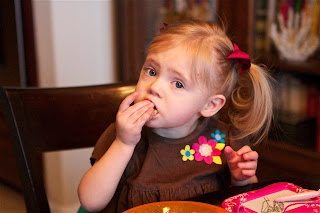 February 2012 Memories (24-25 Months):
*Celebrated your 2nd birthday with a Minnie Mouse Party at our house on January 28, 2012.
*You LOVE your baby sister especially when you play with each other in your crib. You wish that she could nap in your crib and get upset when she has to go to her own crib.
*You started saying many more real words. Some that I can remember are: piglet, tigger, frog, ribbit, ketchup, flowers, orange, bear, whale
*You've also started saying phrases: "there she is", "where is ___?", "where are you?", "night night ____", "bye bye____"
*You have gotten a little better about eating, but you still only eat foods other than waffles with ketchup.
*We went to Atlanta to visit family, and you did great on the airplane. You played with my iPad for most of the time, and you even fell asleep for 20 minutes. 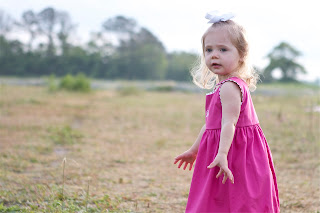 March 2012 Memories (25-26 Months):
*We went strawberry picking at Froberg's Farm at the beginning of the month. You ate a few from the vine, but were mainly concentrating on putting them in the bucket. You had a great time!
*You loved playing in the bluebonnet patch with your sister. You loved pulling the flowers off, but we had to remind you not to hurt the flowers. When we were driving away you said "bye bye flowers!".
*You love to go through the Mickey Mouse Clubhouse Roll Call "nonold"(donald) "daisy" "pudu" (pluto) "ninnie"(minnie) "coo coo"(mickey)
*"Mine" is your favorite word, and you even say it to yourself ("no mine yi-ya (Lila)")
*You are beyond obsessed with my iPad, and your favorite app is the Zoo Train. You are getting really good at making pictures and words with the app. You also search YouTube for your favorite videos. I don't know how you always find the same ones no matter which device you're using (our phones or the iPad).
*You can count to 10, although you skip 6 most of the time for some reason
*You can also count objects up to ten, sometimes with one-to-one correspondence, but that's mainly luck because most kids don't develop that skill until they're 5-8 years old
*You know most of your letters and can say the words "triangle, circle, and star" really well.
*You love to sing "Twinkle Twinkle little Star", "ABCs", Winnie the pooh song, and "Jesus Loves Me". If we try to sing along with you, you shake your head and want us to stop.
*You are so compassionate, and anytime someone is crying you say "It's alright". You really try to make Alli feel better when she's crying.
*You love to say your prayers before bedtime and before we eat. You love to thank God for mommy, daddy, Alli, woo woo, and the rest of your family!
*You got your first of four 2-year molars...they didn't effect you near as much as your first year molars. 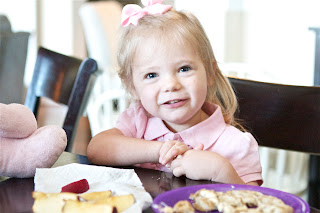 April 2012 Memories (26-27 Months):
*You grew even more obsessed with the iPad, but it works wonders on the airplane :)
*You will eat almost anything as long as it has syrup, ketchup, Polynesian or Chick Fil A sauce on it.
*You've started saying the /d/ in "donald" and you don't say "tow" for cat anymore, you actually say "cat". It came out of no where :( I guess that's a good thing though.
*You have gotten to be a MUCH better listener, after a few rough weeks at school!
*You went on another airplane this month, and you visited the best place on Earth: Auburn University!
*You got your 2nd two-year molar...and we definitely noticed a change in behavior! You acted much like when you got your first set of molars!
*You LOVE to watch Elmo again. You still love to watch Winnie the Pooh and Mickey Mouse Clubhouse too. You are also really into Barney again.
*You have started repeating everything that we say, and can actually say most of the words. Your language has really taken off this past month.
*You are saying so many phrases now that I can't even keep up unless I follow you with a pencil writing it down (which I probably should).
*You also mis-pronounce some words that are really funny. My favorite is when you say "efalent" for elephant.
*You've gotten to be a decent eater in the last two weeks. Your favorite meals are Creamy Chicken Casserole (from the JLGC cookbook), Chick Fil A, squeeze yogurt, refried beans and rice, enchiladas, apples, bananas, string cheese and bagels with or without cream cheese.