After Lila had so much fun moving little plastic chairs around at Finn's birthday party earlier that day, Josh decided to make a WalMart run while the girls were napping to find some similar chairs for Lila to play with at home. While he was there, he found some adorable baby adirondack chairs and couldn't resist getting the girls a pink porch swing also (he's such a sucker for his girls!).  Since our porch ceiling is so tall, he had to also pick up some extra chain at Home Depot, but he got the supplies and had it hung before the girls woke up from their nap.

Lila LOVES to swing, and she was so excited to see what daddy had bought for her! She spent a good thirty minutes swinging, and then she spent another hour or so re-arranging her new chairs. She kept telling us which chair that we had to sit in and sometimes even reserved a spot for "baby" (Alli).  After I brought Alli inside, Josh and Lila brought their chairs up to the edge of the grass and pretended to sit like they were at the beach. They sat there talking for a long time, and I thought it was too cute not to video tape (it's like a 10 minute video, so I thought I'd spare you all).
I went back outside to video tape them, and Lila saw the moon and said "look at the star." I guess it does look like a big star, especially since the sun wasn't down yet. She then serenaded us with her own rendition to "Twinkle, Twinkle Little Star." We are already enjoying our patio so much, but the last step is to bring out the baby pool (and to call MosquitoNix to come out and mosquito-proof the yard!). 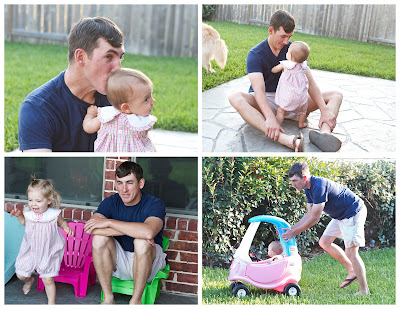 Posted by KariBeth and Josh Gentry at 4:21 PM